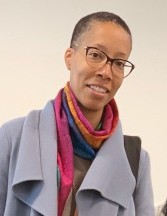 AMIRA ALI BARNETT was born on October 10, 1972, to Reynard and Monique Wilmore in Philadelphia, Pennsylvania. She accepted Christ as her personal Savior at an early age. Amira always liked to remind the family that she was the first member to accept Christ. She was educated through the Philadelphia Public School System, graduated from W.B. Saul High School in 1990, and received her bachelor’s in accounting from Temple University in 1998. As a youth, she exhibited many talents, including her love for dance. Amira attended the Pennsylvania Ballet Company and was in several productions of the annual Nutcracker. She also participated at the Chestnut Hill School of Ballet.

Amira united with her college sweetheart, Kobie Barnett, while attending Temple, and they married on March 17, 1999. They relocated to Charlotte, NC, where Amira had several jobs before becoming employed with Mecklenburg County. As an employee with the county of sixteen years, she excelled in every position held and was a fervent leader. Amira was an advocate for volunteer services through the county’s neighborhood clean-up, Relay for Life, employee fest, and other various capacities. She used the spiritual gifts that God gave her of helps to serve and love others. Although she did not have biological children, she was a mother to all, aka the "boss-lady." Amira was a role model for her sisters, nieces, and nephews.

To order memorial trees or send flowers to the family in memory of Amira Ali Barnett, please visit our flower store.