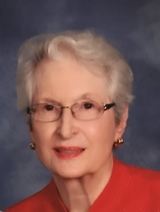 Bobbie Jo Proctor Robinson, 87, of Charlotte, went to be with the Lord Thursday, November 17, 2017. Bobby Jo was born September 12, 1930, in Manatee County, FL. to the late Robert Ludieroy Proctor and Mary Small Proctor. She was preceded in death by her husband Walter Leonard Robinson, Jr.; son Walter Leonard Robinson III; and sisters Peggy Ann Handler and Betty Jane Roehr. Mrs. Robinson's immediate family includes a son, Robert Brian Robinson and his wife Pam; a daughter Virginia Elizabeth Robinson; seven grandchildren and their spouses ,Melanie Trapp and Eddie, Michael Leonard Robinson, Renee Dudding and Brian, Lindsey Hancock and Marshal, Edward Blake Robinson, Amanda Dye and Glenn, Rachel Warren and Tom; great grandchildren Amanda Trapp, Ashley Trapp, Landon Dye, Graham Dye, Isaac Dudding and Eila Warren; asister-n-law Millie Robinson, and numerous nieces and nephews. Bobbie Jo graduated with honors in the class of '48 from Sarasota High School in Florida. After graduation, she left home to attend Nursing school in Atlanta where she earned her RN degree. She met the love of her life, Leonard Robinson, in Atlanta on April 2nd, 1949 while he was attending the University of Georgia. They w ed on May 28th, 1951 and began a wonderful life together. Bobbie Jo and Leonard moved to Rocky Mount, NC in 1953 and then to Charlotte in 1955. In June of 1958 they moved to Mountainbrook where they resided and raised their family for the next 45 plus years. Bobbie Jo worked as an RN at Presbyterian Hospital for many years. In 1967, she went on a 4-week mission trip to Liberia, Africa fulfilling a lifelong dream. Not long after her missions trip, Bobbie Jo returned to school and earned a BS in nursing from CPCC. After graduation, she continued working as a nurse and then served as a nursing instructor. However, she missed working with the patients, which was her passion, and retired from nursing to care for her family. In the mid 1970's Leonard bought a hardware store and Bobbie Jo worked by his side for several years as a buyer. She became interested in real estate while networking as a buyer and went on to earn her real estate license. She eventually left the hardware store and started working for Allen-Tate Realty, where she worked until she retired for good. Bobbie Jo was a charter member of Sharon United Methodist Church, attending services when they used to meet in the old Sharon Elementary School gym. She loved music and sang in the choir as often as she was able for more than 40 years. She and Leonard would attend recitals all over town as well as being season ticket holders for the Charlotte Symphony. A memorial service will be 11:00AM, Tuesday November 21, 2017, at Sharon United Methodist Church. Committal will be private. Condolences made be made to www.gaskinservices.com. Gaskin Funeral Services 14617 b W. Lawyers Rd. Matthews, is serving the Clarke Family. *Knowing Bobbie Jo's passion for music and her church, the family requests that in lieu of flowers, donations be made to the Sharon United Methodist Church Music Ministry. -

To order memorial trees or send flowers to the family in memory of Bobbie Jo Robinson, please visit our flower store.