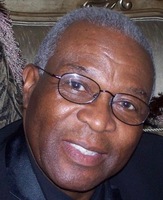 Clarence E. Clark, 78 passed away peacefully and went to be with his Lord and Savior on Friday June 21,2019. from prostate cancer.

He was born April 14, 1941 in Edenton NC to Sudie Hines-Gallop and was raised by her and his stepfather James Gallop. Clarence joined the Army in 1963 and received an honorable discharge in 1969.
He married Patricia Ann Clark December 23, 1968 and from that union, two daughters were born.
He was remarried to Phyllis Hall-Clark August 8, 2009. She has been a comforter, friend and rock of support during his time of illness.
In Middletown, NY where he resided for 35 years, Clarence accepted Christ in the year of 1987 at St James Church of God in Christ, and that is when the Lord took hold of his life and he served as a Deacon for many years. The Lord then transitioned him to Solid Rock Church of God, New Windsor, N.Y. where he became a member in 2005. Upon moving to North Carolina in 2010, he became a member of Central Church, Charlotte, N.C. and served in different ministries.

He had many interest and passions but he loved serving as a volunteer at Novant Health Medical Center, Huntersville, N.C. Infusion Center where he encouraged and uplifted the patient's spirits.

Special love and thanks to our family, extended family, friends, neighbors, co-workers, church family and In His Likeness Life Group for your expressions of love, kindness and support during this difficult time.

To order memorial trees or send flowers to the family in memory of Clarence Edward Clark, please visit our flower store.