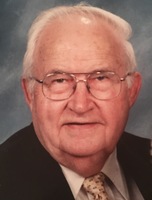 Donald Eugene Tyler was born November 9, 1926 in Kansas City, MO. to Barnie and Minnie Tyler. He graduated from high school in Iberia, MO in 1944, then served in the United States Army. He attended Iberia Jr. College for 2 years, during which time he became a Christian while attending the Iberia Church of the Nazarene and received a call to preach. In 1949 he enrolled at Olivet Nazarene College in Kankakee, IL. He graduated in 1952 with a B.A. degree in Theology.

Rev. Tyler married Janice Stauffer, also a 1952 graduate of Olivet, on June 14, 1952, and they began their ministry together in the small town of Lodi, MO. After 2 years he was called to pastor his home church at Iberia, MO. It was while he was pastoring there that his parents both gave their lives to Christ, and while there both of his children were born. After 7 years he was called to the First Church of the Nazarene in Rock Island, IL where he served for 13 years. He then pastored the Ottawa First Church of the Nazarene for 10 years, returned to Rock Island to pastor for 5 additional years, then pastored his final church at Monroeville, PA for 4 years before retiring in 1993. He reminisced often about the joys of pastoring in each of these congregations, seeing many come to Christ, following God's leading, and experiencing loving relationships with his congregants.

Upon retirement, the Tylers moved to Rockford, IL and Rev. Tyler began "fill in" and interim work at several churches in Illinois, Wisconsin and Iowa. They later moved to Charlotte, NC, where he has been for the past 17 years. While in Charlotte he served as interim and associate pastor at Madison Park Community Church and their home church was Trinity Church of the Nazarene. Once again, they experienced many loving relationships at both places. His beloved wife, Janice, was a significant part of his life and ministry. She died in November, 2013.

He is survived by his son Darrell (Julie)Tyler of Charlotte, NC, and daughter Bev (John) Anderson of Cary, NC; 4 grandchildren and 4 great grandchildren; brother Robert (Alice) Tyler of State College, MD and sister Alta (Don) Stevens of Rolla, MO, and 7 nieces and nephews.

Rev. Tyler was a well loved and respected man. He was faithful and obedient to God, a man of deep faith, a kind and gentle soul. He loved people, loved to fish, was fascinated by trains and until very recently he was still repairing antique clocks, a love he developed early in his adult life. He had deep and abiding love for all of his family and took great joy in spending time with them. He will be greatly missed by the many, many people who's lives he has touched.

As his family, we want to thank each of you for your love and care through the years! You have loved him well. As his children, there are no words to express how much that means to us. Thank you!

To order memorial trees or send flowers to the family in memory of Donald Eugene Tyler, please visit our flower store.