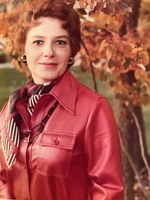 Eileen Ruth Hunt passed away on July 17, 2019, at the age 83. She died unexpectedly, while under the care of a physician performing a medical test on her heart.
Known to many as "Lee", she was born on October 10, 1935 in Toledo, Ohio. She was the daughter of Jane Andrews Whitt and Alexander Andrews. In her youth, Lee was honored as "Miss Toledo" in the city's beauty pageant. She was an exceptional athlete and excelled in basketball, golf and tennis which she continued play late in life.
She is survived by her two sons, Bryan Hunt of Tampa, Florida and Hayes Hunt of Philadelphia, Pennsylvania and her brothers Mark Rodney of Springboro, Ohio and Daryl Rodney of Toledo, Ohio.
In 1986, Eileen left Ohio and moved to Charlotte, NC to explore a new life and new opportunities. In Charlotte she continued to raise Hayes as a single mother and worked as an Executive Legal Assistant to in-house counsel at First Union, Wachovia and Wells Fargo for 28 years before retiring in 2004.
Lee Hunt was a self-sufficient woman that lived, until her last day, independently and in her own way. She was an incredibly strong woman and a problem-solver, making sure her children had everything they needed to lead happy and successful lives. Eileen had an open and full heart for animals, especially all her dogs. She would rescue and care for many strays throughout her life.
In many ways, Eileen R. Hunt was a trailblazer in the way she lived and the choices she made. She will be greatly missed but the respect and love from those that knew her will endure.

Her family will hold a private celebration of her life.
To order memorial trees or send flowers to the family in memory of Eileen Ruth Hunt, please visit our flower store.