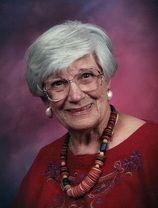 Ellinor Ann DeLind Dunn, 99, of Carrington Place Nursing Home, Matthews (formerly of St. Petersburg, Florida) was carried across Heaven's threshold in Jesus' arms on Sunday, September 14, following a courageous battle with pneumonia. She was preceded in death by her loving husband, Mathon Baldwin Dunn; her parents, John W. and Ellie B. DeLind; four brothers (and sisters-in-law), John, Jr. (Margery) DeLind, Rene (Kleist) DeLind, William (Ione) DeLind, Lanier (Elizabeth) DeLind; nieces, Margery Randall and Ellen DeLind; nephews, John W. DeLind III, Thomas DeLind. She is survived by son, William Michael Dunn of Humble, Texas; daughter, Patricia Ellen Dunn, of Matthews, North Carolina; nephews, William DeLind II of Madison, Wisconsin, Robert (Marcia) DeLind of Okemos, Michigan, and Douglas (Laura) DeLind, of Mason, Michigan; and six great-nephews and nieces. Ellinor was born in Chicago, Illinois, but moved to Lansing, Michigan, with her family when she was a baby. She graduated from Lansing Central High School and did pre-law and business coursework at Lansing Business College, Northwestern University, and American University. She held various secretarial and administrative positions at the Bureau of Labor Statistics, the U.S. Maritime Commission, General Motors Oldsmobile Division, and Montgomery Ward before marrying the love of her life in 1953. While her children were young, she was avidly involved in PTA and school functions. Whether it was providing hot chocolate for patrol boys on wintery mornings, organizing the annual Book Sale, or selling hot dogs at Friday night football games as a Band Booster, Ellinor was always on board. She continued to work part-time in market research from those years until she finally "retired" at age 82. Ellinor moved to St. Petersburg, Florida, in 1970, after losing her beloved husband to lung cancer the year before. They only had 16 short years together. She never remarried, but instead poured her life into service and outreach to others. She loved life, loved people, loved God, and loved America. She was very active in church and church organizations, as well as a number of patriotic and service organizations, including Daughters of the American Revolution, P.E.O., United Daughters of the Confederacy, Colonial Dames of the XVII Century, Women Descendents of the Ancient and Honorable Artillery Company, Huguenot Society, Dames of the Court of Honor, New England Women, Daughters of American Colonists, U.S. Daughters of 1812, Old Plymouth Colony Descendents, Decendents of Colonial Clergy, and Magna Carta Dames. Everyone who knew Ellinor knew how much she loved animals as well. From a menagerie of dogs, cats, birds, guinea pigs, hamsters, rabbits, and various other little critters the kids brought home, to raising Scottish Terriers with her husband in the last few years of their marriage, to having her heartstrings tugged with the needs of various pups who needed a home along the way in her later years, she was always happiest when life was shared with God's precious little animal companion gifts. Ellinor fit more into one lifetime than most-often against strong odds-and never gave up. Though her body became frail and she struggled to communicate in recent years, her sweet smile was a gift she continued to share freely with all who loved and cared for her! Through tears we send her on to Heaven: tears of sadness because she will be missed terribly, but tears of joy that she is with the Lord and free from the pain and struggles her poor body has had to endure for so long. She missed her 100th birthday by just three days...but far greater is the celebration now in Heaven than anything we had in the works here! "Precious in the sight of the Lord is the death of His saints." (Psalm 116:15) In lieu of flowers, the family is requesting that contributions be made to the DAR Junior American Citizens Fund, PEO Cottey College Fund, or Wycliffe Bible Translators. - -

To order memorial trees or send flowers to the family in memory of Ellinor D. Dunn, please visit our flower store.