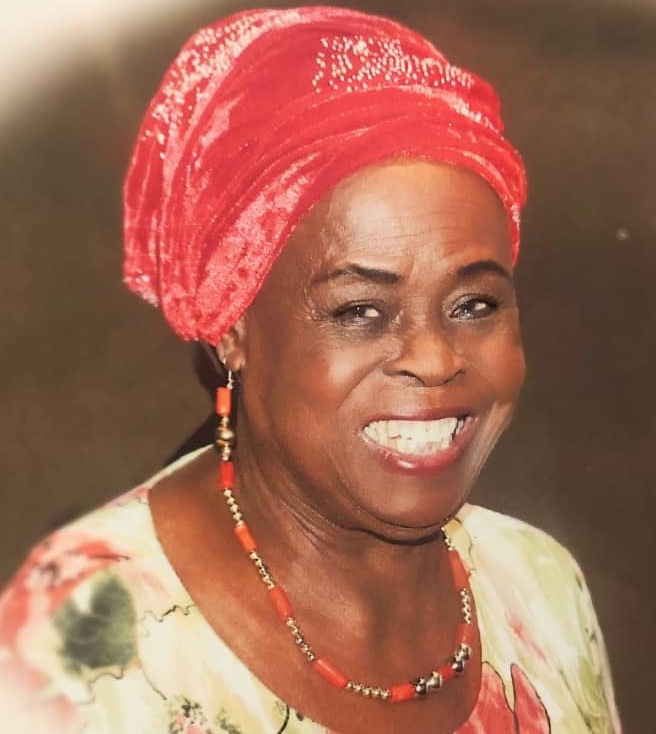 “Love cannot remain by itself – it has no meaning. Love has to be put into action, and that action is service .” – Mother Teresa
Born February 14th (Valentine's day) seemed to be a prophetic forth-telling of the nature of Dr. (Mrs.) Gloria E. Konyeshi. Love, ceaseless service and giving to the less privileged marked her life. Pa James Alile (JP) and Anna Alile welcomed their second child into their lives in the year 1942 in Benin City, Edo State, Nigeria.

PERSONAL LIFE
Dr. (Mrs.) Gloria E. Konyeshi enjoyed 45 blissful years of marriage to her husband, late Apostle (Dr.) Emmanuel U. Konyeshi, who went to be with the Lord in April of 2007. They got married in 1962 and left for the U.S where her husband was employed by the Nigerian Embassy in Washington D.C. She was a founding member of the 1stAmerican Diplomats' Wives group.
She is survived by her 5 children, Dr. Stella Nnadi, Mr. Emmanuel Konyeshi, Mrs. Nnebuogo Edomwande, Mrs. Omosere Abifarin, Mrs. Adesuwa Ojumola. She was blessed with 10 grandchildren, Michael Konyeshi, David Nnadi, Zara Kerry, Esosa Edomwande, Oluwaseun Abifarin, Ifedeji Abifarin, Nosa Edomwande, Chigozie Abifarin, Ayooluwa (AJ) Ojumola and Ivie Ojumola. In 2020, Mama was ecstatic to welcome her great granddaughter, Francesca Rae Gloria Konyeshi. George Edomwande, Kunle Abifarin, Ope Ojumola and Samantha Konyeshi are her sons and daughter in-law. She is also survived by her siblings Dr. Clement Alile and Mrs. Clara Aibangbee. She is preceded in death by her older brother, Apostle Hayford Alile.
SPIRITUAL LIFE
Dr. (Mrs.) Gloria E. Konyeshi gave her life to God at a very early age and has been living for the Lord since then. She has always served multiple roles in the church (St. Joseph Chosen Church of God), starting as a choir member as a young girl. She served as Deaconess, midwife and was a leader in numerous church groups. At the time of her passing, she was a member of the Ecclesiastical council in her church.
ACADEMICS
She attended Almadiyah Muslim Elementary school in Benin City and Eastern High School Academy, Onitsha. There she excelled in both academics and sports. She was adept in the track, and the high jump. She then attended Fanatta School Of Beauty Culture and Cosmetics Chemistry in Washington D.C, U.S.A.
After the pilgrimage trip to Jerusalem in the 90s, she felt she wanted to know the Bible for herself and her God at a much deeper level. This led her to attend Faith Bible College & Seminary Otta, Ogun State where she studied and attained her General Certificate, Bachelors, Masters and Doctorate in Theology degrees. She was ordained as a minister of God at the Faith Bible College & Seminary in 1995.
She was also made a chaplain, became a commissioner, and then a 3-star general.
As an ardent learner, she has since attended numerous conferences and completed other training courses. The last week-long conference/retreat: “Be In Health '' which she attended in Georgia, USA, August 2021, had a profound effect on her. She was happily back to studying the word of God with practical, Biblical applications to life. Here she further attained spiritual breakthrough, learning about the correlation between the release of hurts, applying forgiveness and true wholeness in her spirit and body.
WORK EXPERIENCE
To say Dr. (Mrs.) Gloria E. Konyeshi was an illustrious and industrious woman is an understatement. She truly embodied the Proverbs 31 woman. She never ate the bread of idleness and indeed her own works praises her in the gates. Below are a VERY few examples of the business ventures she successfully engaged in to date.
Upon arriving back to Nigeria in the 70s, she opened a hair and make-up studio which also provided make-up services and accessories to brides. She also at one point owned a primary school. She obtained an alcohol beverage distributorship and she promptly sold her license and entered into the transport business.
The transport business is where she was mostly known for leaving her mark in the business world. She went where most men feared to tread and became the first female transporter, aiding in the opening of the Ojota Motor Park. This was done with the permission of the then governor of Lagos State, Raji Rasaki. She was a founding member of the National Union of the Road Transport Workers (NURTW) and became the branch chairman. Her Lagos – Benin line boasted of over 30 vehicles/drivers. In the transportation world, she was affectionately named “Madam Bendel”. She retired from the transportation business after diligently serving and making ground-breaking reforms there for 27 years.
PASSIONS
With her desire to be the voice for the voiceless and bring justice to all, she would have loved to join the police force. Her passions included singing, beading and helping the needy. Truthfully, she had never seen a need that she does not view as a call to service. She was in constant service to the less privileged. Her services ranged from visiting orphanages to hosting events on her own birthdays to bless orphans and widows. Her dedication to the less privileged culminated in the NGO she set up called “The War Against Poverty”. Her NGO established different training programs (like a tailoring shop) where people can be trained in professions they can use to sustain themselves and get out of poverty.
We will greatly miss Mama, but we know she is resting in the arms of her saviour.

To order memorial trees or send flowers to the family in memory of Gloria Esohe Konyeshi, please visit our flower store.