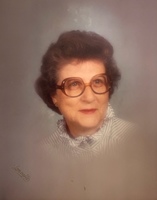 Jacquelyn was born August 30, 1921, in Plains, Georgia. She was the daughter of the late Broades Wellons and Mary Mills Wellons.

After high school, she attended Georgia Southwestern College in Americus, Georgia, before continuing her education in Atlanta at Grady Hospital School of Nursing.

During World War II, she served in the United States Army from 1943 until 1946, advancing to the rank of 1st Lt.

In 1981, she retired from Georgia Regional Hospital for the Mentally Ill in Atlanta.

Her hobbies included bridge and gardening.

Jacquelyn was a member of Candlewick Baptist Church.

She was preceded in death by her husband ,John G Binns (1993), sister, Virginia Wingate, and brother Grady Wellons.

To order memorial trees or send flowers to the family in memory of Jacquelyn Binns, please visit our flower store.