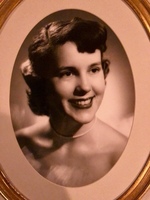 Roxie Jane Robertson Love, 86, of Charlotte, died on December 14, 2018, under the care of the Levine & Dickson Hospice House-Huntersville.

Jane was born January 5th, 1932, in Charlotte's Mercy Hospital, daughter of the late Arthur Glenn and Roxie Liner Robertson. She was sister of William Neal and Robert Glenn, both of Charlotte, and the late James Arthur Robertson. She married James M. "Jimmy" Love, Jr. April 2, 1955, in Wesley Heights United Methodist Church, her church from birth.

Jane was an honors graduate of Harding High School, having remained continuously on the Honor Roll and earning membership in the National Honor Society. She was offered numerous academic and music scholarships to several colleges, but instead, accepted a job offer from Union National Bank (later First Union), where she could practice her skills gained as most outstanding business student of 1950 in Ms. Lettie Smith's class. She served as Executive Secretary to J. Russell Smith and George S. Crouch.

Her musical talents included flute and piccolo in the Harding High Marching Band and Orchestra. She also excelled in voice.

Jane was active in Youth for Christ and was a member of and solo soprano in the choir of Wesley Heights United Methodist Church. Later she was a member of The Christian Women's Club and the Women's association of the Charlotte Symphony Club. After she married, Jane joined St. Mark's Lutheran Church and quickly became one of it's soloists. She also sang in special choirs and at weddings, funerals, and civic affairs.

After the birth of her first child, Linda, in 1956, Jane gave up her business career, becoming active in church outreach, through her women's circle, helping children improve educationally, financially, and with their health care. She was a key part of a special church group who assisted two Vietnamese families immigrate and get established ( jobs, schools, homes, and health care) in Charlotte. Jane was a compassionate caregiver to many at the schools her children attended. She and Jimmy worked together and co-chaired a Shepard Group program at St. Marks.

Jane loved and nurtured her grandchildren; she and Jimmy moved several times in their retirement to be closer to them. Those moves included Sunset Beach, Wake Forest, and back to Charlotte.

While living in Sunset Beach, she and Jimmy joined Seaside United Methodist Church and worked together on a number of outreach programs to assist families, especially children, including Habitat for Humanity, Hope Harbor Home, a shelter for battered women, and Providence Home, an emergency shelter for "at-risk" children she and Jimmy helped found. Jane was especially involved in the success of the first thrift shops for both Hope Harbor and Providence Home.

Living in Wake Forest during the years 2000-2007 they joined Wake Forest Baptist Church, where they were members of the "seekers" class, co-chaired the Outreach Committee, served on the Nursing Home Committee, and assisted monthly with visitation, meditation, and communion.

Jane and Jimmy moved back to Charlotte on 2007 joining Christ Lutheran Church.

A wonderful, loving and caring songbird, Jane was generous, devoutly-faithful wife, mother, mother-in-law, grandmother, daughter, sister, sister-in-law, and aunt. Her dedication to service was based on the Scripture Parable of the Living Water.

A service of thanks to God for Jane's life will be held at 2pm on Thursday, December 20th, in the old sanctuary at Christ Lutheran Church, 4519 Providence Road, Charlotte, NC 28226, with the Reverend Scott Suskovic officiating.

Jane's family is being served by Gaskin Funeral Services.

To order memorial trees or send flowers to the family in memory of Jane Robertson Love, please visit our flower store.