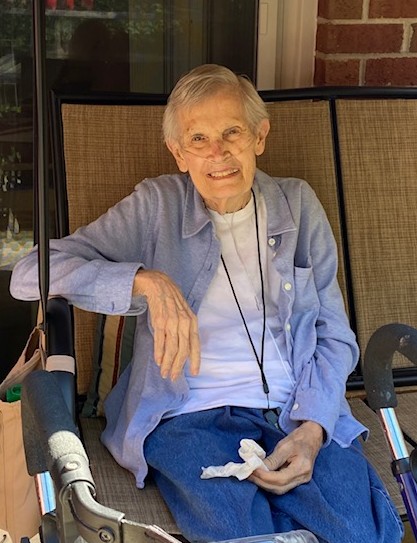 Marilyn Virginia Waddington, 86 of Waxhaw, NC went to be with the Lord on July 5, 2020. Marilyn worked for Wycliffe Bible Translaters as a Nurse and Bookkeeper since August 1964.  She was a faithful servant and served the Lord with Wycliffe for 56 years.  She spent 27 years in the Philippines, 9 years in Uvalde , TX in field training, 3 years in Miami, FL Hospitality House, and 17 years working as a part time nurse at JAARS. Marilyn loved the Lord and was a true example of Proverbs 31 wife to her husband and family.  Her favorite hobbies include crocheting, stamp collecting, going to the beach with her family.  She loved putting together puzzles and always had one on the table to be completed by anyone who came to the house.  Later, she would complete them on her iPad.

Marilyn was married to Joseph R Waddington, of Philadelphia, PA on May 19, 1955 and had 4 children.  Joseph Mark Waddington of Pennsylvania, Ruth Whittlock(Tom) of Brevard, NC, Janet Lyford(Doug) Corinth,NY and John Waddington(Kathie) Adamsville, OH.  She is survived by her husband, their 4 children, her sister Carol Batts(Bill), 7 grandchildren and 6 great grandchildren. She is preceded in death by her brother, Jerry Just(Susie) and sister, Jody Blankenship(Jack).

Philippians 1:6  Being confident of this very thing, that he which hath begun a good work in you will preform it until the day of Jesus Christ.

To order memorial trees or send flowers to the family in memory of Marilyn Virgina Waddington, please visit our flower store.