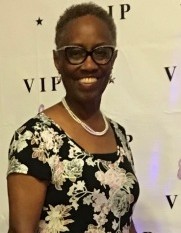 Monique Levarnia Wilmore was born on August 10th, 1952, to LaDora Crudup in Flushing, NY. At an early age Monique was educated in the school district of New York and at the age of twelve her family relocated to Philadelphia, Pa. She continued her education in Philadelphia and graduated from Kensington High School in 1970. She was very athletically inclined and was a member of the volleyball, softball, and basketball teams.

On September 28th, 1972 she was united in holy matrimony to Reynard Wilmore the love of her life. From that union the Lord blessed them with four beautiful daughters, Amira, Naeemah, Aisha, and LaDora. Monique and Reynard were blessed to have been together for 50 long years. Through the challenges of life, they were always there for each other.

Monique was employed at Women’s Medical College of Pennsylvania for 30 years. Over the course of those 30 years Monique held several positions. She started her employment as a Unit Clerk and later became an Administrative Assistant of the Physical Therapy Department. Monique was widely respected for her exemplary, dedication, and service of all those that she had the privilege to serve. She was able to retire from Women’s Medical College in 2004 after 30 years of service. After retiring from MCP, she was employed with the DEA for 18 months. In 2006 Monique relocated to Charlotte, NC where she was employed at Levine’s Children’s Hospital. She worked for Levine’s for 8 years and was able to retire in 2014.

In June of 1987, Monique accepted Jesus Christ as her personal Savior. Monique served as a Deaconess at Second Pilgrim Baptist Church and also at Sharon Baptist Church in Philadelphia, PA. Monique had a passion for saving souls. Wherever Monique went she carried her Message of Hope cards, handing them out to everyone she came in contact with. Even while in the hospital she would witness to all the doctors and nurses, whoever came into the room would receive a Message of Hope card. She was deeply concerned about the eternal security for her children and grandchildren. Many people in the Charlotte Metropolitan area knew her as “Mama Mo”.

Monique had a passion for people and was very outgoing. In her pastime she was very involved in Love Life Charlotte and KCC’s Women’s and Evangelism Ministries. She was active at the YMCA and participated in the small prayer group that met once a week. Wherever she went “she let her light shine before men that they would see her good works and glorify her Father in Heaven.”

Service times will be forthcoming. . .

To order memorial trees or send flowers to the family in memory of Monique Levarnia Wilmore, please visit our flower store.