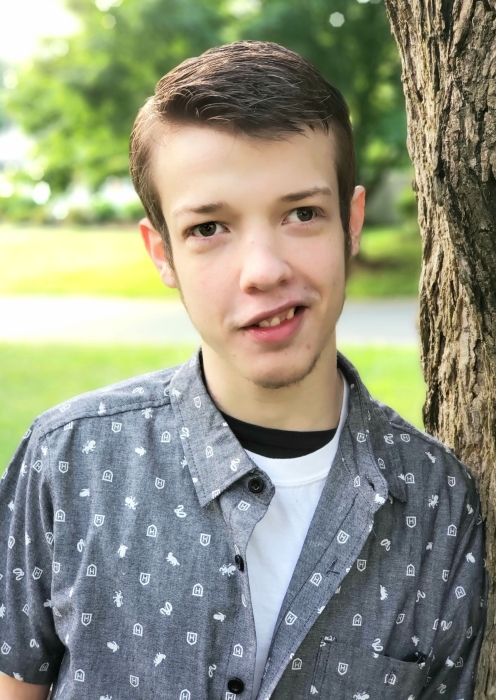 Peter Wallace McBride (“KING PETER”) of Matthews, North Carolina, passed away at home in his sleep in the early morning of October 1, 2019.

Peter was born June 13, 2000 to Charles and Sarah (Koch) McBride in Charlotte and lived most of his life in Matthews.  Peter was born with a rare heart defect called Hypoplastic Left Heart Syndrome, and after 3 corrective surgeries was given a second chance at life with a heart transplant at the age of 5.  From that moment on, nothing held this special young man back.   Despite health and physical obstacles all throughout his life, he always found a way to persevere. His determination and spunk will be sorely missed.

Peter attended Matthews Elementary, Crestdale Middle and 2 years at Butler High School before being homeschooled. He graduated this past June, a big accomplishment and proud moment.

Peter was an active member of The Church of Jesus Christ of Latter-Day Saints and fulfilled his callings valiantly. He was recently made an assistant in the early morning seminary (bible study class) and was so thrilled to be part, even if it was a very short time. He loved getting up early and going to class, talking about the gospel, and seeing all his friends.

Peter was known for his kindness, his quirky half smile, quick wit and sarcasm, and the ability to charm the daylights out of anyone who ever crossed his path.  He was an avid participant of Pokemon Go, loved all things Dr Who, Avengers, Transformers and Legos.  He very recently told his mother “You don’t quit playing with toys because you get old, you get old because you quit playing with toys”.

Peter leaves behind his parents, Charles and Sarah, and his brother Finn; Grandparents, Linda Koch of Matthews, and Jon and DeNell McBride of Kuna, Idaho, as well as many adoring aunts, uncles and cousins spread out all over the United States and abroad.  He also says farewell to a legion of amazing friends and fans who love him dearly, his favorite cat Skittles, and a lasting legacy of courage and bravery. He was preceded in death by his sister Jillian (1998), grandfather Chuck Koch (2016), and his “heart brother” Devan Leger (2005) of Louisiana, who gave him an extra 14 years due to organ donation and that precious gift of life.

Any donations can be made to The Greg Olsen Foundation, The HEARTest Yard-Receptions For Research. https://donate.receptionsforresearch.org/   This program helps families and caregivers of children born with congenital heart defects.

A special memorial celebrating the life of Peter will be held Sunday October 6th at 7pm, at the Church of Jesus Christ of Latter-Day Saints located at 5897 Hemby Rd in Weddington.

To order memorial trees or send flowers to the family in memory of Peter Wallace McBride, please visit our flower store.