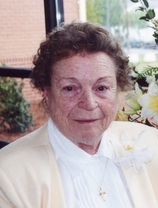 Pauline (Polly) Fowler Cranford left to join her loved ones in their heavenly home on Friday, August 23, 2013 at the age of 92. Born April 1, 1921 in Charlotte, NC to Walter Dixon Fowler and Minnie Lorene Tollison Fowler, Polly was a beautiful, sweet-spirited redhead. She married Frank Carter Cranford on November 9, 1940 who preceded her in death in 1981. Polly left behind her children - Howard Franklin Cranford and his wife Debbie of Simpsonville, SC, Lorene Cranford Brannon of Huntersville, NC and Ronald Dixon Cranford and his wife Carol of Harrisburg, NC, six grandchildren - Paula Brannon Gerrard, Michael Cranford, Melissa Cranford McHaney, Christiana Cranford Jurado, Charis Cranford Browning, and Carrie Cranford, 13 great grandchildren - Christopher, Andrew, Jeffrey, Jessica, Christopher, Gabriel, Nicholas, Brianna, Colt, Ashley, John, Jacob, Jackson, Chloe, Tyler, Tristen, plus one on the way, and 7 great-great children - Ana, Payton, Leland, Trinity, Alyssa, Journey and Haydon. Grandchildren Angela Cranford Blackwell and Nathan Paul Cranford preceded her in death February 2013. There was wonderful reunion in heaven as they welcomed their much-loved grandmother. Always a professional woman working at various jobs over the years - Department Supervisor for Stately Lady Nightwear, Bookkeeper for Mecklenburg Manufacturing Company, Office Assistant with Professional Insurance Processing Service and at 70 years old, took a job as a Legal Assistant with a Charlotte Attorney and earned a degree as a paralegal. Polly was always learning, taking many classes over the years including computer programming and introduction to the PC and Windows. Polly adored her family. She loved nature- flowers, plants, birds and small animals. At one time she raised orchids in her greenhouse. She had many hobbies including reading, flower arranging, ceramics, and needlework including needlepoint, tatting, sewing, knitting and crocheting. On several occasions her needlework or ceramics earned blue ribbons at the county fair. As a member of University Hills Baptist Church, Polly enjoyed being with her friends from the Senior Adult Ladies Bible Study. In spring of 2012, Polly moved into Carillon Assisted Living in Harrisburg. The family would like to thank the staff for taking such good care of their mom. Also, thank you to CMC-Northeast and the Tucker Hospice House for making her last days comfortable. Pauline Fowler Cranford lived a good and full life. She will be missed by her family and friends who loved her dearly. In lieu of flowers, the family asks that donations be made to Family Support Network of the Southern Piedmont, a 501 (c) 3 non-profit organization that provides support to families of infants born prematurely and children with special needs. Checks may be mailed to: Family Support Network of the Southern Piedmont . P.O. Box 824, Harrisburg, NC 28075. -

Service Extra Info Services will be held at the graveside.

To order memorial trees or send flowers to the family in memory of Polly F. Cranford, please visit our flower store.