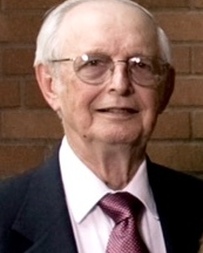 Robert John Hughes, III, having been dedicated to God by his parents, Robert J. Hughes, Jr., (Jack) and Beulah Owens Hughes, was born into this Present Evil Age at St. Mary's Infirmary, Galveston, Texas, in July 13, 1927. Sometime during his early years on the Oaklawn Fernery/Bayou View Farm, in Dickinson, Texas, he was also born into the Age To Come through faith in the Lord Jesus Christ. He continued living in these two-ages until [date to be supplied] when he left this Present Evil Age to continue life in the Age to Come for eternity. Robert was joined by his brother, Donald Owens Hughes, on February 14, 1930, and by their sister, Florence Esther Hughes (Lobit), on August 23, 1937. Living in Dickinson during these years were his paternal grandparents, Robert J. Hughes, Sr, (Bob), and Esther Bray Hughes, and his maternal grandmother, Mrs. Minnie Owens. Robert attended Dickinson Elementary and High School being graduated in May 1944. During these years in Dickinson he worked at farming, in the local oil field, and as a rodman/chainman for the county surveyor. During his early years in Dickinson, Robert attended the Episcopal Church, his father's, and later the Methodist Church, his mother's, and later during his college years he added the Southern Baptist to his Christian experience. Instruction in the Holy Bible, the Word of God, began at home with Daddy and Mother with help from Egemeier's Bible Story Book. His study of the Bible became more ordered through Bible courses taken as elective courses while pursuing his Doctor of Veterinary Medicine degree at Texas A. & M. University. Near the end of this program the Lord asserted his authority decisively changing his focus from veterinary medicine to studying and teaching the Bible. This required additional Biblical studies at Moody Bible Institute in Chicago and Fuller Theological Seminary in Pasadena, California. Upon completion of his Master of Theology program at Fuller Seminary he was invited to teach science and Bible courses at Kansas City Bible College in Kansas City, Kansas (now Calvary Bible College and Seminary). While in the Kansas City area from 1958-1963 he married Betty Colleen Strunk and they were blessed with Robert John IV and James Eric. During 1962-63 Robert worked as a Veterinary Meat Inspector under the Meat Inspection Division of the USDA. In 1963-68 he returned to science and Bible teaching at a Berean Academy, Elbing, Kansas, a Christian High School in the farming region of winter wheat, fat cattle, hogs, feed lots, tall silos, and wide open spaces. During these years he earned a Secondary School Teaching Certification for the State of Kansas. In 1968 he returned to his favorite work of Bible College education by joining the faculty of Fort Wayne Bible College in Fort Wayne, Indiana. His teaching assignments included Bible and natural science courses employing his training as veterinarian, educator, and Bible teacher. Having been introduced to the Christian Day School movement at Berean Academy Robert and Betty were pleased to join in the development of the Fort Wayne Christian School Association that enabled them to provide John and Jim, their sons, with a Christian school education. John's class was the first class to graduate from Fort Wayne Christian High School. During these years Betty taught Pre-school at Christian Union Day School and worked at Lutheran Hospital as Nurses Aide and Ward Secretary. Following the death of Robert's father and mother he and Betty moved back to his family home in Dickinson in 1983. Robert began the Dickinson Community Bible Class, a home Bible Class, on Tuesday evenings that continued until in 2002 when he and Betty sold their home place and moved to Monroe, North Carolina, to live with their son, Jim and his family. While in Monroe Robert and Betty attended Carmel Baptist Church in Matthews, N.C., assisting in teaching in the Adult and Pre-School Departments, respectively. Robert is survived by his sons John and Jim and their wives, four grandchildren, and one great-grandchild.. Robert John Hughes, Ill, 88, of Monroe, North Carolina, went to be with the Lord early Friday morning, July 16, 2015. - -

Service Extra Info This will be a celebration of life service for both Robert and his wife, Betty Colleen Hughes.

To order memorial trees or send flowers to the family in memory of Robert John Hughes III, please visit our flower store.