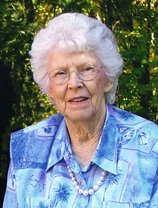 Ruby Fast was born Ruby Ruth Warkentin on March 29, 1922 in the plains of western Kansas. At home with her parents Henry and Sarah and three siblings, she grew up speaking Plautdietsch (Low German), the language of her forebears who came from the Molotschna colony in Ukraine. English was her second language, acquired in a one-room country school. On the farm, hardships were plenty. She endured the massive dust storms of the 30s that could turn day as dark as night. She witnessed total ruin of her dad's ripe wheat fields by violent hail, and experienced a close encounter with a tornado. In winter, she layered up blankets in the cold of a drafty upstairs bedroom where a little powder snow could even drift onto the covers. Chores included wandering far out over unfenced pasture land to find and bring in the cattle. After completing high school in the town of Meade, she enrolled at Tabor college where she earned credentials as a school teacher. From 1945 to 1949, back in Meade county, she taught in a couple of different schools, again with all the grades in a single room. Teaching Vacation Bible School in the Ozarks and then further studies at the Rio Grande Bible Institute, including Spanish acquisition, led to teaching Vacation Bible School in Monclova, Mexico. While teaching in Mexico, a German student from Grace Bible Institute in Omaha, Nebraska, came through town on a road trip to see the work of Wycliffe Bible Translators farther south. Her acquaintance with Gerhard Fast was meant to be, and a match for life was made. Ruby now took on the challenge of learning High German. With a mutual vision to be a couple in missionary work, Ruby went off to California to study at the Biola School of Missionary Medicine, where she earned nursing credentials. In 1956 Gerhard and Ruby were married. After studies at Norman SIL and survival training at Jungle Camp, they crossed the Atlantic by ship to Germany to meet the in-laws. In 1958 Gerhard and Ruby arrived in Peru to begin a rich, 38-year chapter of their lives. There they learned the Achuar language, into which they translated the New Testament and many portions of the Old. Ruby spent the strength of her years backing up Gerhard in the long, meticulous process of Bible translation. She typed and re-typed text on a mechanical typewriter in the day before computer editing. She composed primers for the newly created Achuar schools, literally cutting with scissors and pasting with glue the layout that would go to the printers. For years, she was the only recourse on the river for medical help. She treated for ever-present intestinal parasites. There was a gunshot wound that led to tetanus and a rare survival. She treated pemphigus, snake bite, sting ray wound, leishmaniasis, tuberculosis and other maladies. She boiled her needles and glass syringes and occasionally re-sharpened the tip of a needle on a rock. Ruby and Gerhard prayed for the sick and commended them to God. Still, many patients returned later to trusted witch doctors. More was at stake than just the physical body. In the end, many were healed, and many were healed in body and soul. The Achuar Church today can testify to those years when the good seed was planted in their hearts. Through good times and bad, Ruby lovingly raised her three children, Pablo, Danny and Monika. When appropriate, she applied that wooden spoon, but she also wisely allowed ample freedom. Her gift of hospitality and her wonderful cooking leave great memories and inspire emulation. In 1996 Ruby and Gerhard left Peru and moved to Waxhaw, North Carolina, where they spent eight years on Radin Road in walking distance from the JAARS center. From there, they moved four miles to live with their daughter Monika and her family. After Gerhard passed away in 2007 Ruby remained in the loving care of her daughter and son Danny, until God took her Home to be with Him where for so many years she had longed to go. Ruby is lovingly remembered by her son Pablo with his wife Colleen and daughter Natasha; her son Danny; her daughter Monika with her husband Daniel and daughters Katja, Juliana, and Annelie; her sister Viola Friesen with her husband, Jake Z. Friesen; and her brother Albert Warkentin. ~Praise~ My dear heavenly Father dwelling on high-- He loves me so much! But I do not know why. He gives me the hills, the valleys and trees, the sunshine and shadows, the cool of the breeze. He's given me family and friends by the score. Oh, why should I ever need ask Him for more? Each morning when I wake His compassions are new. If this were not so, Lord, what could I do? He gave me His one and only dear Son, Who over my soul the battle has won. My enemy, the devil, has lost his tight hold. I rest in my Saviour; I'm safe in His fold. Lord, You are my Hope and You are my stay. I'll sing forth your praises from day unto day. At last when I see You with a smile on Your face, I'll know that it's all through Your infinite grace. Oh wonderful Jesus, You are my Friend. I know You'll be there at my long journey's end. ~by Ruby Fast - - -

To order memorial trees or send flowers to the family in memory of Ruby Ruth Fast, please visit our flower store.