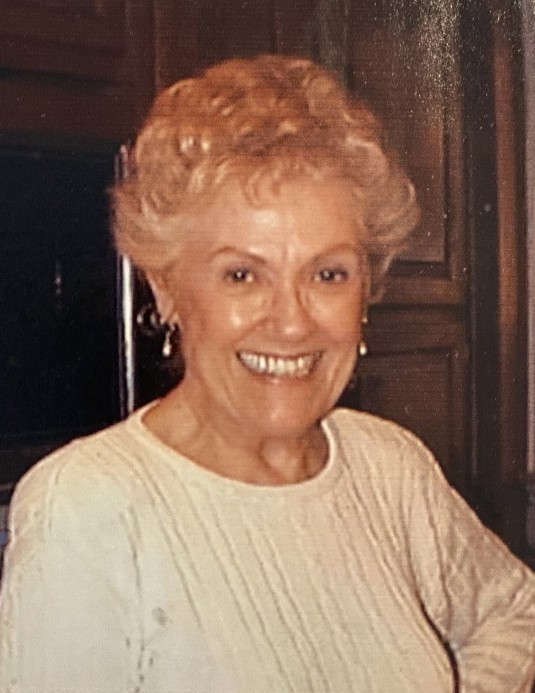 Sheila Mackie (nee, Hemingway) 92 of Matthews, NC.
Sheila was born in Birkenhead, England, in 1928 to Robert Stanley and Gwendolyn (Triggs) Hemingway. She was their 2nd child, Robert Kenneth(Ken) Hemingway being 4 yrs older. The family moved to Brooklyn, NY in the early 1930's where she lived for almost 80 yrs.  She married Gordon E. Mackie in April, 1948 and they had two children: Carol Lynn Mackie and Robert Gordon Mackie. They divorced in 1968.
Sheila worked all her life, starting at age 17 when she graduated from Bay Ridge High School. She worked at The Law offices of Sullivan and Cromwell on Wall St, New York. When her children arrived she stopped working for a while and after they were in school, she  was the secretary at All Saints Episcopal Church in Brooklyn. She worked again for Sullivan and Cromwell for 31 yrs as Secretary for Mr. Bernard Aidinoff, a senior Partner in the firm.  After retiring she took 4 weeks off and was then secretary for Father Powers at St. John's Episcopal Church.  She was always busy. She loved to sing, go to the opera and ballet. Her email address was "oprlvr".  She traveled to Europe many times with friends and visited relatives in England.  She loved her grandchildren and their children and visited as often as she could. In 2010 she moved to North Carolina to a retirement community close to her daughter. She played bridge twice a week, scrabble and dominos with her daughter and son-in-law  and made many new friends.  She always had a beautiful smile for everyone. She will be missed by all who knew her.
She was predeceased by her parents, her brother and former husband. Surviving are her daughter Carol Woodward (husband Michael) and son Robert (wife Diane), 8 grandchildren, 16 great grandchildren and 1 great-great grandson.

To order memorial trees or send flowers to the family in memory of Sheila Mackie, please visit our flower store.