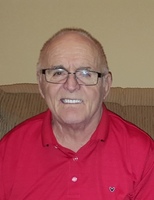 Stephen Edward Perlaky Jr., went home to see His Lord and Savior Jesus Christ on Friday, February 1, 2019. He had endured a long illness, but passed away quickly and peacefully in the garage, a place that was very representative of his love of working with his hands and sharing his knowledge with others. He was a loving husband of 40 years to his wife, Earleen L. Perlaky (Deppen-DeLeon), and proud father of Mark E. DeLeon (Darcy), Stephen E. Perlaky III (Charlotte), Laura Young (Nick) and Michelle Harder (Craig). His 12 grandchildren were very dear to him; Lyida Manuel (Jabez), Alayna Chrysler (Jacob), Ethan DeLeon, Aubrey, Averey, and Zachary Perlaky, Selah, Jonah, and Rebekah Young, and Moriah, Silas and Avenlee Harder. Recently becoming a Great Grandfather to Bethany Manuel made him especially proud. Stephen is also survived by his loving mother, Patricia Whitman Perlaky and sister, Patsy(Richard) Anselmo of Maryland. He was preceded in death by his father, Stephen E. Perlaky, and sisters, Judy Christiansen (Perlaky-Martin) and Angela Perlaky.

Stephen was born in Toledo, Ohio on August 15, 1946 and was the oldest of four children. He grew up in Oregon, Ohio. Some of the fondest years of his childhood were spent in Dade City, Florida living with his Grandma and Grandpa Whitman during middle school. As a teen, he was a wrestler and football player and received top physical fitness awards. Stephen graduated from Cardinal Stritch High School in 1965, in Oregon, Ohio.

After high school he went on to barber school, at the direction of his uncle, and became a Barber. In 1966, Stephen enlisted the U.S. Army Reserves where he served 6 years. Steve, as most called him, spent his life as a Craftsman. He loved his tools and working on projects. The pinnacle of his career was being the founder of Perlaky Repair & Finish, a boat repair business in Trowbridge, Ohio. He later went on to become a Commercial Project Coordinator and worked hard in a variety of capacities until he retired 2003. He was known as man who thought things through, worked from sun up to way after sun down, and provided quality craftsmanship on every project.

His father instilled in him a love of boats at a young age. Steve shared many memories of working on and enjoying boats. His tools, carpentry work, and in his later years ‘tinkering around in the garage' brought him a lot of joy. He had a unique perspective on life and shared his sense of humor freely.
Steve faced many difficult health issues during the last several years, but endured them without compliant. He demonstrated incredible strength and faith; and always had a positive attitude no matter what the set back. Steve is fondly remembered for his extraordinary energy, his passion for life, and remarkable way he lived it. He brought laughter to everyone who knew him. He often praised his caregivers since 2001. Steve was a wonderful family man and friend, and will be greatly missed by all.

Visitation will be held on Saturday, February 9, 2019 from 10:00am to 12:00pm at the Mill Grove United Methodist Chapel in Indian Trail, North Carolina and his memorial service will be held at 12:00pm. A time of remembrance and gathering of friends will be held in Ohio in the coming months and will be announced at a later date. Memorials can be given to Habit for Humanity of Union County or one's choice.

To order memorial trees or send flowers to the family in memory of Stephen Edward Perlaky Jr., please visit our flower store.